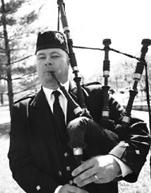 Currently the Director of Piping at Macalester College, Mike began bagpipe lessons at 18 while a student at Macalester. He has been a full time bagpipe teacher and performer since 1999 and has studied with Andrew Hoag, Donald Lindsay, Jim MacGillivray, and the late Lindsay Kirkwood. In 1997 and 1998 he was awarded Champion Supreme by the Midwest Pipe Band Association in Grade II as a soloist. He is now an accomplished Grade I piper. Mike was a music teacher in the Minneapolis Public Schools before taking his current position at Macalester, and he is currently the Pipe Major for the Grade 3 Macalester College Pipe Band. ​

Andrew starting learning the bagpipes at 12 from his parents, both pipers themselves, and got his first set of bagpipes when he was 13. Andrew has won numerous solo awards, including 2nd place at the United States Silver Medal Piobaireachd Competition in 2013, and was the Overall winner of the prestigious Nicol-Brown Amateur Invitational Piping Competition in 2004. He is currently the Pipe Sergeant for the Grade 3 Macalester College Pipe Band and an accredited full piping adjudicator.

Meridith currently plays with the Macalester College Pipe Band's Grade 3 group and helps lead the pre-Grade 5 group. She started learning to play the pipes while a student at Macalester.